Nearly every acre of Florida has been trodden on by explorers, Native Americans, settlers, soldiers, traders and entrepreneurs. Although our state has a rich history, sometimes it can be difficult to find a connection between our lives and experiences, and the people who lived decades or centuries ago. There are ways to cross the barrier of time and make history something you can reach out and touch; Florida State Parks’ cultural and historic trails can lead you to these transformative experiences. On these special trails, you can trace the same paths as the citizens of the past.

At the intersection of the Suwannee and Withlacoochee rivers, patches of rain lilies spring up on earthen mounds built to defend against Union Navy gunboats. The rivers were once used to ship lumber and cotton north, which supported the sister towns of Ellaville and Columbus. The site of Columbus is now Suwannee River State Park. In the 19th century, large steamships like the Madison traveled the Suwannee river from the port of Cedar Key to Columbus, often acting as mobile general stores and post offices. Today, the park’s trails take visitors through an open-air museum. Visitors can explore steamboat remains, one of the oldest cemeteries in Florida or remnants of Confederate camps The Madison now rests underwater in Troy Spring State Park along the Suwannee River Wilderness State Trail. 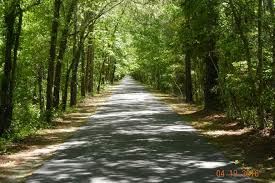 As Florida’s population increased, the railroad eclipsed the steamship as the best way to transport goods and people. The Tallahassee-St. Marks Historic Railroad State Trail offers a glimpse into Florida’s history, and how  a rail line could dramatically change a town’s economy and way of life. The railroad, one of the oldest in the country, ran for 147 years before it was abandoned. Now, the trail takes bicyclists, horseback riders and walkers through the ecologically rich Woodville karst plain to the town of St. Marks, once a major port for shipping cotton and other agricultural products grown in the Tallahassee area.

After the Great Depression, New Deal era programs led to the construction of many parks and trails across America. In Palatka, Ravine Gardens was built with federal funds to stimulate the economy and beautify the town. Workers planted thousands of azaleas in the unique steephead ravines, which were formed by the slow collapse of sandy hills. The trails at Ravine Gardens State Park take you through carefully manicured gardens and shaded wilderness areas. Bridges spanning the ravines offer panoramic views of the historic tourist destination.

these trails represent just a few episodes in Florida’s diverse past, there are many other opportunities to take a walk through history in Florida State Parks. At Dade Battlefield Historic State Park, a trail threads through the wooded site of the Second Seminole War skirmish, and along a military road once used by U.S. troops. A trail at Bulow Plantation Ruins Historic State Park reveals the area as it looked when the Seminoles pushed settlers out of Florida’s frontier, and the plantation ruins tell the dramatic story of how it was abandoned. Many historic parks also offer living-history events and re-enactments. These can’t-miss events are the most exciting way to learn about Florida’s history. However, there is nothing quite like walking through the same forest and hearing the same birds as the pioneers, warriors and travelers of the past.