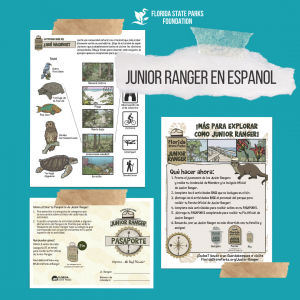 Recognizing Latino Conservation Week, the Florida State Parks Foundation announced today that 27 Florida State Parks in Central and South Florida now have Spanish-translated Junior Ranger kits available in print. While previously available virtually, this is the first time the kits have been printed in Spanish. A $25,000 grant from the Batchelor Foundation provided more than 6,000 translated kits.

“We are thrilled these kits are now available starting this summer, and that this partnership enhances the ability of Spanish-fluent youth to actively participate in the Junior Ranger program,” said Tammy Gustafson, Florida State Parks Foundation President. “Increasing environmental education access for our Florida students is an important part of engaging children in understanding the importance of preserving, protecting and sustaining our natural resources.”

The program covers four components of a park ranger’s job: natural resources, cultural resources, recreation and service. Students complete the six CORE Activities from the kit and turn them in to park staff to receive their Official Junior Ranger patch.

It does this through programs that preserve and protect state parks, educate visitors about the value of state parks, encourage community engagement and active use of state parks, and advocacy. The volunteer Board of Directors represents private and public sectors as well as local and statewide interests. This project was completed by the Florida State Parks Foundation Services LLC, which is a limited liability company affiliate of the Foundation.