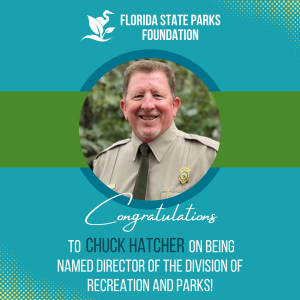 The Florida State Parks Foundation welcomes today’s announcement that Chuck Hatcher has been named Director of the Division of Recreation and Parks. Chuck has served as Acting Director since November 2021.

“The Foundation congratulates Chuck on being named Director and recognizes his significant contributions to the division,” said Tammy Gustafson, Florida State Parks Foundation President. “Working closely with Chuck and other division leadership, we have accomplished important projects that enhance visitor experiences at Florida’s award-winning state parks. We look forward to the continued strong partnership and successes ahead in the years to come.”

Chuck joined the Department of Environmental Protection in March 2016 as Assistant Director of Field Operations for the Division of Recreation and Parks. Prior to that, he served for a decade as Director of Parks and Recreation in Jackson County, Florida, where he received numerous awards including the Excellence in Leadership Award presented by the Jackson County Chamber of Commerce.

It does this through programs that preserve and protect state parks, educate visitors about the value of state parks, encourage community engagement and active use of state parks, and advocacy. The volunteer Board of Directors represents private and public sectors as well as local and statewide interests.

About the Author: Courtney